I have become lately obsessed with making sweets. Mostly popsicles.

The lazy person’s version of them.

As in around three ingredients I can throw in a blender and then freeze in a mold. A mold that can only make four at a time.

First ever attempt was strawberries and cherries. Not bad but quite tart.

Second attempt was with those two and blueberries and agave nectar.

(I only have plastic wrap so no fancy packaging at all. Having only four sticks, I have resorted to breaking wood skewers in half.)

Today, I blended some coconut milk and pineapple and added some agave nectar. (I’m not comfortable enough to appease my inner alcoholic just yet, so didn’t put in rum to make a frozen drink on a stick.) Somehow warming up the pineapple makes it tastes better because I had fully defrosted them in the microwave then between my almost three year old and myself, a lot of the pineapple went missing.

Yes. One is missing. 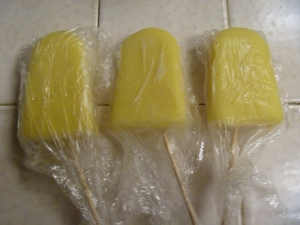 Where on earth does Muscle Beach/Hot Dog on a Stick get their sticks? I need those.

I’ve gotten it into my head that I should make a garland. Yarn pom-poms with fabric yo-yos.

The idea for this garland came from when my niece wanted a heart garland after she brought a scrapbook sheet with her. Some of the paper wasn’t usable but was able to make quite a bit. 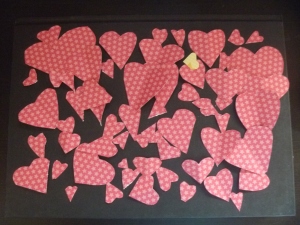 So, I did this with those hearts. 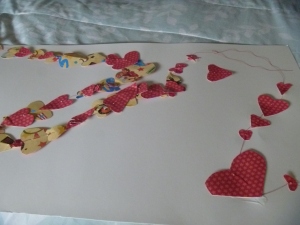 I didn’t like it so I’m just going to stick the hearts, minus the ones on the right which were glued down, in a fabric bag and reuse them for something else.

So. There was some frozen strawberries and so some more popsicles and some goodies were made.

One of the four. Strawberries, a handful of blueberries, agave nectar and whole milk were blended together.

(I didn’t measure anything out so I can’t give anything exact.)

I had tons left so added more strawberries and milk and agave until I ended up with about three and a half cups.

Using about two cups of the strawberries, I added vanilla and two eggs. Mixed it with two and a half cups of whole wheat flour, 1/2 teaspoon baking powder and 1/2 teaspoon salt. There was some melted coconut oil added but I forgot how much. Made cupcakes.

While trying to mix the cupcakes, the whisk fell apart.

The leftover I made a sauce where I added the leftover melted coconut oil and a lot of powdered sugar. (I didn’t measure so no idea just how much sugar.) 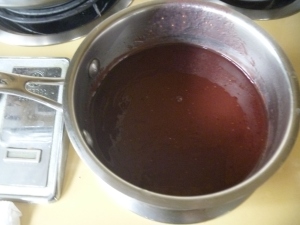 I poured some sauce over some of the cupcakes in lieu of frosting.

It resulted in this: