Yesterday I was trying to make these cheese crackers because I was really wanting cheese puffs and looking through my cookbooks. They came out yummy but not quite the texture I wanted. I rolled them too thick and piercing before they were cooked didn’t work. 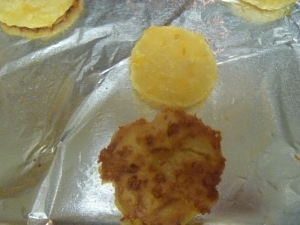 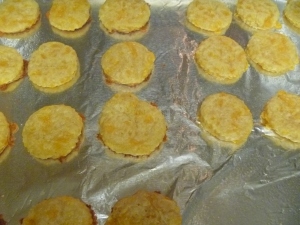 2 cups of cheese (I used 1 and 1/2 cups of cheddar plus Colby and Monterey Jack for the rest,

although it came up to the rim of the measuring cup so was more 2 and 1/3?)

Mix all together then set in fridge and let sit for about half an hour.

Roll out dough and cut with cutters into whatever shape you want or cut into strips.

If you want a slightly crispy bottom, spray PAM on foil before placing the crackers.

Cholula Chili Garlic. The only question I have is why is this stuff only made in small 5 oz. bottles? This is the only hot sauce I like and it needs to be bottled in jars. Okay, gallons.

Ground beef is either made into meatloaf, meatballs, hamburgers or Stroganov.

I browned off the beef in squares with salt and pepper, then set it in the dish before putting three tablespoons of butter in the pan and then adding some onions until soft; added a can of mushrooms (I prefer fresh mushrooms but the 16 oz can was good enough). After cooking them, I cheated and added the Lipton’s sauce mix with the amount of water it says on the back. After it cooked for about ten minutes, I took it off the heat and added three huge spoonfuls of sour cream.

After putting the sauce on the hamburgers, I cooked the whole thing in the oven at 350 for about twenty-five minutes. 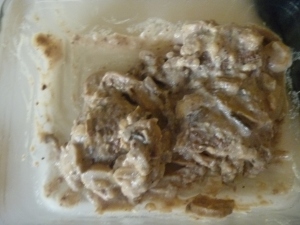 I had boiled five chicken drumsticks with one huge carrot (probably would equal two regular size carrots), a couple of celery sticks and three garlic cut in halves.

After boiling for about an hour, I cut everything into pieces except for the garlic which got smashed.

I put the stock back on the stove and added some water. I added three handfuls of macaroni and a whole cut up tomato.

The pasta is fully cooked and add back the chicken and the other veggies it was cooked with and reheated for a minute before adding the juice of one lemon and two tablespoons of patis. I did add a little salt and pepper at one point.

This is a terrible picture of the whole thing, because the steam kept fogging up the camera. It’s not pretty and I did consider putting it in the blender. 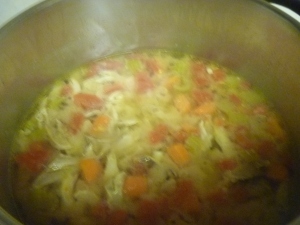 By the way, my child will start attending preschool on the first Monday of November. I am both anxious and completely happy for him.