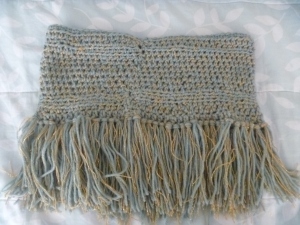 After messing up again on the circular needles, after trying to switch up the stitches, I finally got fed up and ended up crocheting a cowl which I finally finished this morning with an extra trimming of the fringe and single crochet of one of the yarns at the top edge.

Still would have looked better in silver, instead of the gold thread.

I did like using the circular needles, as there was less worry about dropping a stitch, and will eventually use them for something else.

Have I ever mentioned that knitting just makes me a faster crocheter? I probably have many times before.