The pink shawl I haven’t progressed much on.

A second shawl I began on Friday.

When you add another ball of yarn, sc/dc for the row the first skein ends and the next row after.

I’m not sure why I need to make shawls all of a sudden. 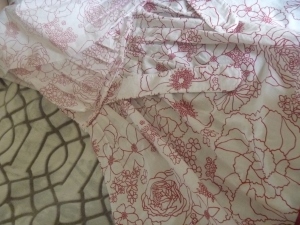 I started turning another skirt into an apron over the weekend. This one is a heavier cotton. I can’t remember how much it cost although it was bought at a Marshalls.

It isn’t turning out as good as the first one. Stitching is more wonky.

Whatever I sew, though, the stitching will be wonky. I keep aiming for perfection but flaws always happen, but that’s good, because it’s been obviously made by human hands and not a machine.

Altering a skirt into an apron is a fairly simple process even though I seem to like making things more complicated than they are. It depends on the skirt and its pieces. Before you begin, make sure you know your height, waist size and whether you’re short-waited or long-waisted, because you want to be able to tie it comfortably.  Or, where to put the button and buttonhole, if you won’t be tying it.

First you split the skirt back into two pieces, leaving the waistband intact for one.  The piece with the waistband will be the skirt and the other part will be cut up for the top half. There will be raw edges on the sides which you can use seam binding on to cover them. French seams would look nice, too.

I haven’t finished the top half, but it’s a matter of cutting the second piece into a suitable size. Knowing your height helps here, so when you cut the part that goes around your neck, whether it ties or not, it won’t make everything too long and it will fall exactly where you want.