Continuation of the knitted cardigan. Finished the second pocket and now knitting the other front.

After that, the sleeves need to be knit, block everything then assemble it all. A new cardigan. (yay)

It looks huge but prefer things to be oversized so layering is an option. 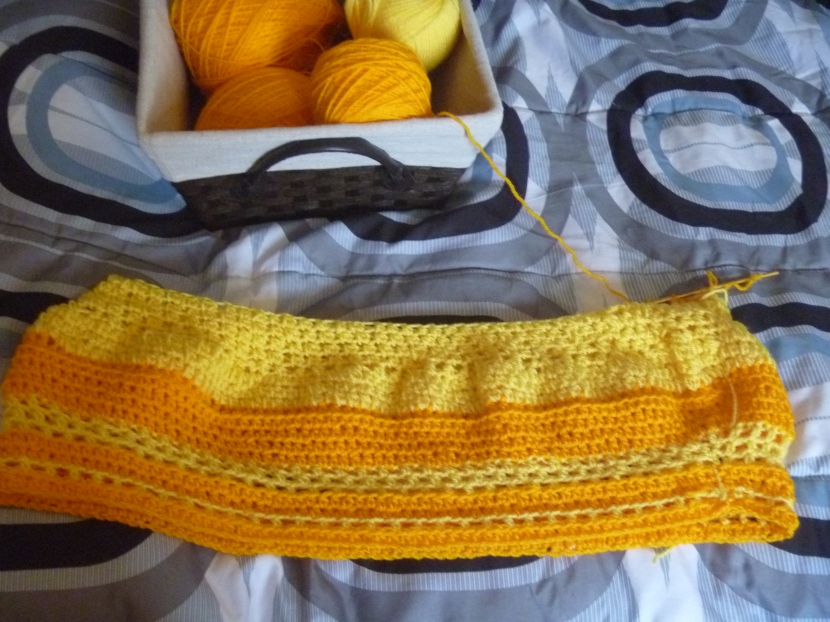 I had to switch to a hook a size larger after Dylan somehow managed to make my F hook disappear.

After undoing some rows and started the larger hook on row four of section 8 of the sequence.

It will probably be a dress and not a top like originally planned. This part will be the skirt. Hopefully, there is enough yarn after buying 1610 yards, so we’ll see if I run out before I am done.

The aim is for around 32 inches so it’s close to knee-length.

By the way, I’ve been wanting to try out a rosewood hook and one of the hooks that light up and allowed myself to buy one of each on Amazon in a F/3.75mm.

I’ve never used wood crochet hooks before and see if it makes any difference.

Tools are a personal preference and Takumi make the best circular needles. KnitPicks make some pretty awesome straight needles. I prefer wood for knitting needles as I can’t keep stitches on the needles if I use anything else.

For crochet, I’ve switched between plastic and metal and like everything color coded so I don’t have to look at the size to make sure the right one is being used.

Crochet hooks and straights have light up options. Light up circular needles don’t exist and they need to. It would awesome if the connecting tube lit up and the battery was in one needle but I can see problems with tools disconnecting and breaking apart.

I started another project after finding a Tunisian crochet hook in my tools after getting one some time ago then forgetting it was there. Just a scarf using the leftover dark green yarn from the striped green sweater, to teach myself.

There is a picture of the beginning on the Instagram account where I was just beginning to figure out how to make the knit stitch. Instead of just hooking through the hole, you need to go behind the front hook and yarn over that way.