My attention, until last week, was split between how to celebrate my son’s birthday and what I wanted to wear to one of my brothers and his wife’s annual Halloween party. Both fell on the same day last week.

I have this problem where, if I’m indecisive, I easily grow lazy. I couldn’t decide on or make a costume, so found myself wearing Paul Frank pyjamas and didn’t think to have a sleep mask on and just grabbed a mask that just covers ones eyes. I used that as a headband and put my hair in pigtails.

Spent a good part of Friday baking Dylan’s birthday cake. Used a recipe for German Chocolate Cake and assembled the two layers with the pecan and coconut frosting, a day after everything sat separately in the fridge.  It fed seven people comfortably and a couple slices were leftover.

I have a sewing project in idea form on the table in the sewing room with the leftover floral silk from the pants and a bit of lace. Haven’t drafted a sleeveless tank to cut out the pieces from.

I finally finished Meredith’s hat, after taking a bit of time to reknit most of the whole thing. Attaching four separate pieces made for an ugly hat.

Attaching the short ends together. This is the inside.

Two pictures of the hat finished. Haven’t attached a pin back to the second flower.

After joining the ends, I crocheted the rest, leaving it fairly open on top. 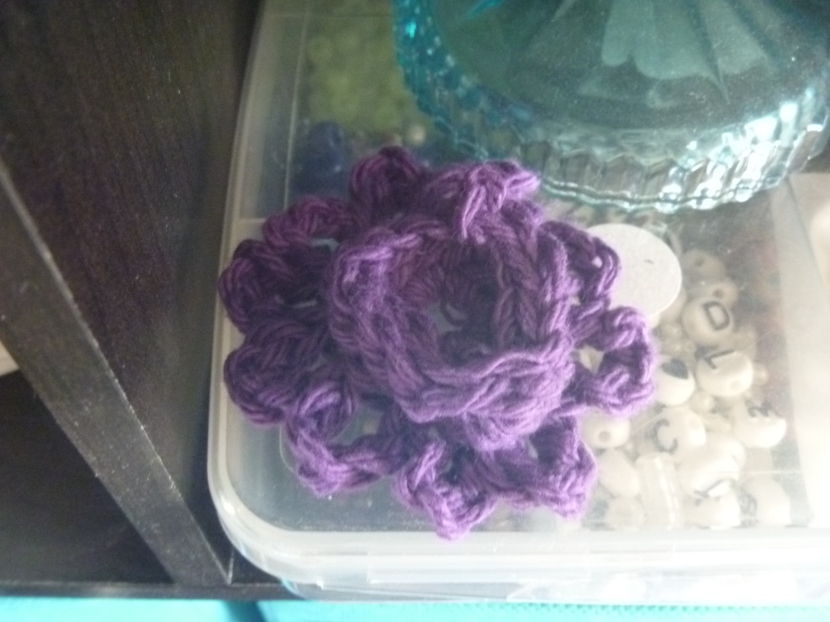 I frogged the white yarn after knitting a few rows then started making this. Have no idea what the end result will be.

I admit I’m practicing making bobbles because I have this idea to make a scarf or something for a certain someone I like who is blind and have been wanting to make him something since a week after we started talking. In bits and pieces, I’m researching how to incorporate braille into crafts.

(Also, I’m very aware at how terrible I am at not plugging in alt text. I’m sorry. I need to work on that.)