Until the weekend, I got absolutely nothing done and  just let the time slip by and didn’t start or finish anything.

Over the weekend, I finished up another scarf.

I didn’t bother blocking it because I like it curling that way, although I could sew up the other side so it’s one long tube.

After adding fringe from a different yarn, it was done. 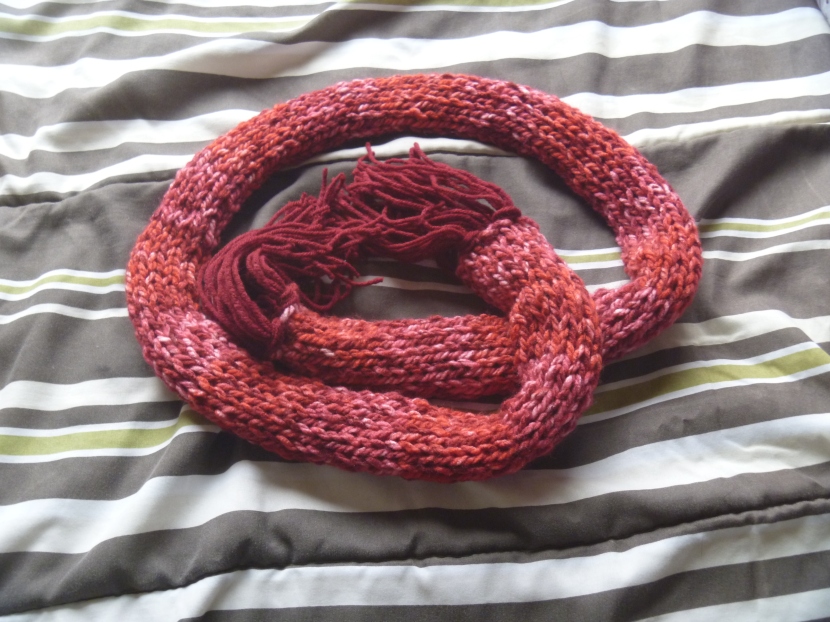 I use my phone to post videos on YouTube and had to cut up something I wanted to quickly explain into three videos, which is the antithesis of fast.

Wasn’t able to go in depth and give a proper explanation, but wanted to try to show the difference between crochet and knitting because a lot of people constantly confuse the two. It’s also hard to focus when your kid is standing next to you.

Also, I think you can hear it but I had the TV on, which I should turn that off when I vlog, but The Fiddler on the Roof was on.

So, here are the clips I posted yesterday on YouTube:

Part one. The tools. I think I repeated myself three times.

Part two. This is how fast I normally knit.

Part three. Beginning a crochet project. I only made three chains and should have just made a circle but wasn’t thinking it through.

There will be more videos on projects and other stuff, and tend to post on Sundays. So far, the videos are just me rambling and doing nonsense. I also don’t edit them so you can tell I’m not very good at being professional.

Another thing about having a YouTube channel is being amused by looking at the Analytics and found someone in Australia did a Google search on me on the 6th and found my channel and I totally wanted to give them a shout out. Probably someone who hates me from Twitter because I noticed a very specifically named playlist went up more than 100 views.