This week, and next week’s, posts will be posted on Fridays, because of jury duty. Obviously I’m not allowed to openly talk about the case, until it’s completely over, which should be by the end of next week. With all that down time, I’d be able to have copious amount of time to work on projects, but the courthouse I go to doesn’t allow knitting needles or crochet hooks, so can’t get much work done. I have been bringing Jenny Erpenbeck’s novel, Visitation, with me, but haven’t gotten much reading done. All my breaks are spent with my phone.

That said. I did squeeze in a few things after getting home. (I did have a break today and spent most of it going through emails. It’s amazing, how, once you break your routine, it’s takes a bit of time to catch up. And you don’t realise you have a routine until something comes along and mucks up the order of things.

This was not done very well but tried to make a bag to carry my crochet hooks and knitting needles, because I’m constantly dumping out the measuring cup I store them in, but it’s just the crochet hooks, for right now. 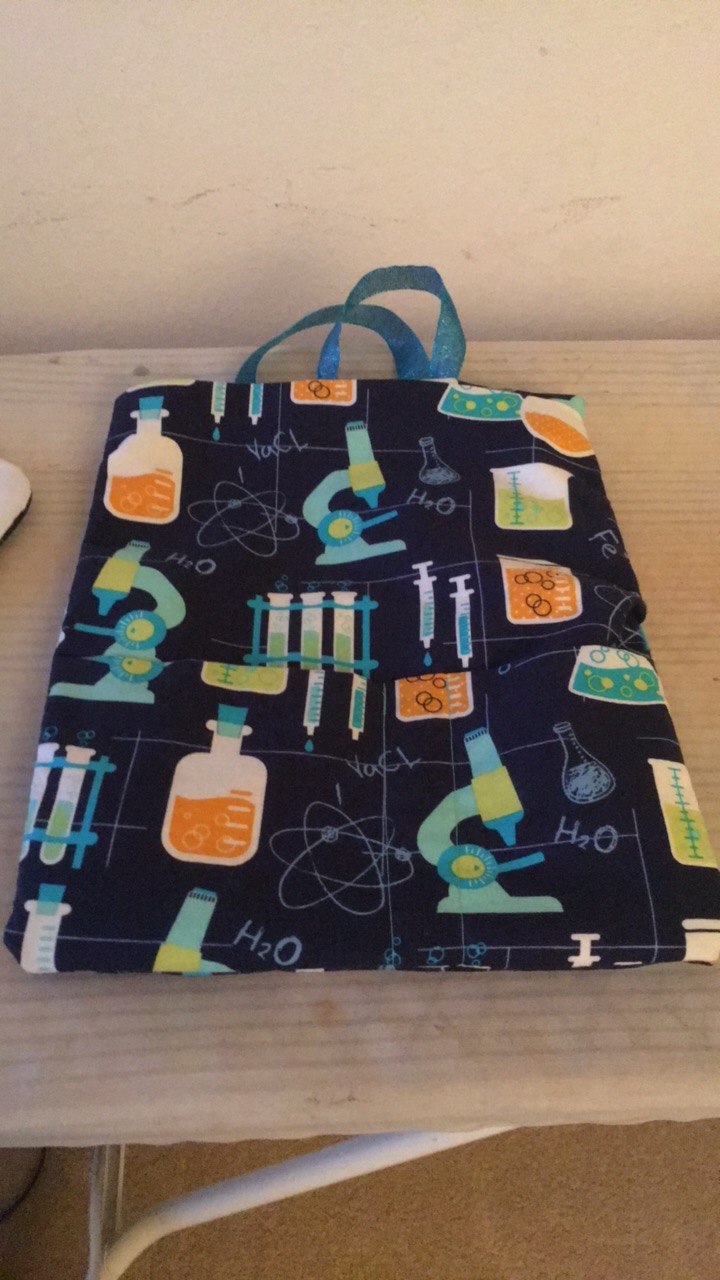 It’s not noticeable but there are three small pockets at the bottom, to sort the crochet hooks. All the hooks fit into the biggest pocket. The middle one can hold a pen or two. The third pocket is smaller than the first and has nothing at the moment.

Behind that is another pocket, which is almost as big as the main bag inner.  I, also, accidentally sewn the lining a bit too long, so it folds up a bit inside.

I was going to put a flap on it, but decided against it.

Instead of a flap, I made a wee pouch and will put a snap closure. It could be a coin purse or something similar.

I wish there were more of this fabric but this small bit was in the clearance bins at Joann’s.

What I was originally doing with this, it was frogged yesterday and started over. Had originally cast on with a bigger needle size before moving it to a different needle and tried to attach the ends to each other and it was just a huge mess.

So far, my notes, this time around, are:

It’s just two skeins of Lionbrand’s Mandala. I could totally make the sleeves in a different yarn, than that yarn, but haven’t quite decided what sort of sleeves this will have. 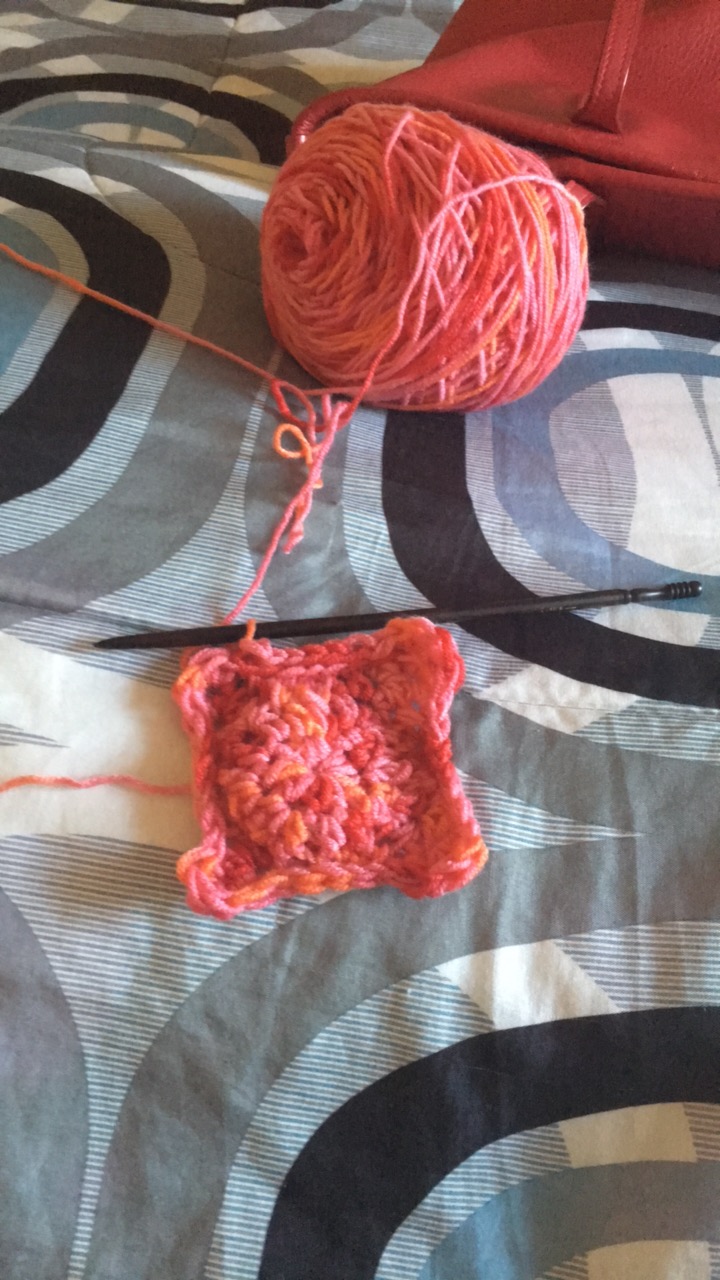 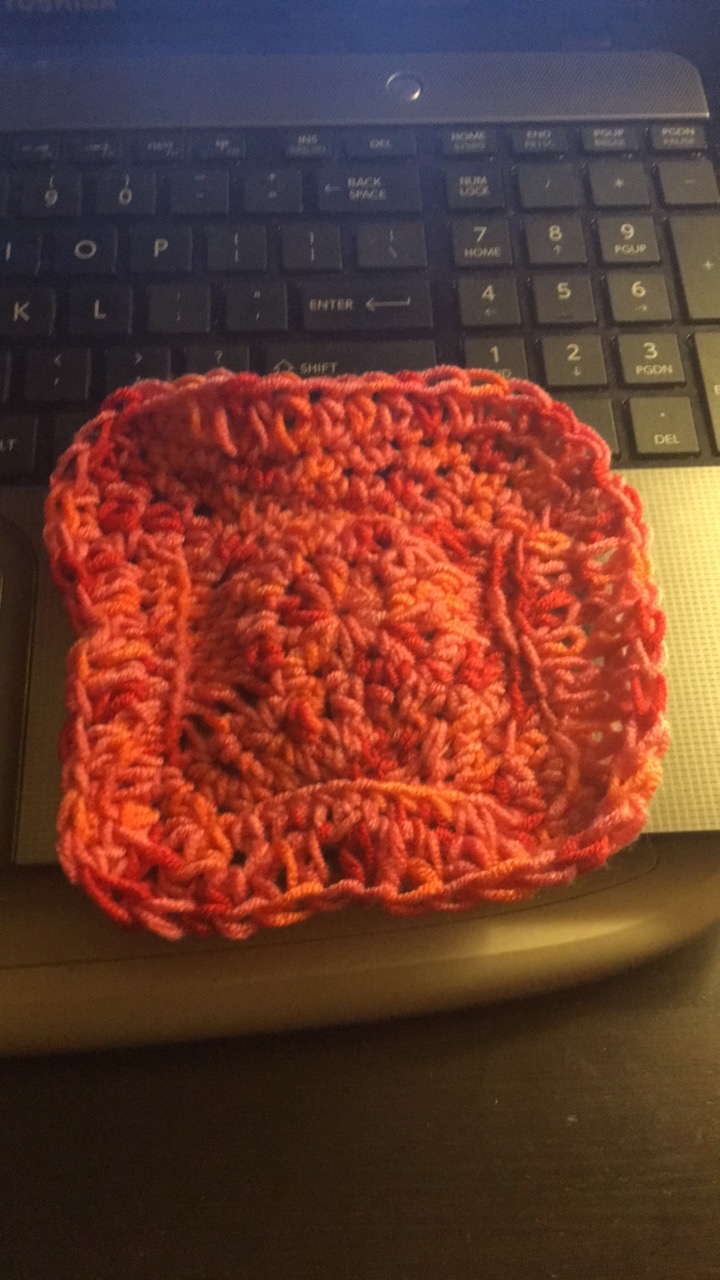 These two crochet squares, I guess granny squares, will be part of the blanket. Hopefully.

The first one wasn’t, and didn’t, come out flat. With a bit of pinning and blocking, it shall be better.

The number square is fine, as it is, although one side is oddly lopsided.

And, as you can see they’re both about the size of CD jewel cases.