Spent part of the weekend, and majority of last week, separating the four tops then cutting pieces and sewing part of a bow tie, but have run out of interfacing so need to buy more. The bow tie is for Larry, a certain someone’s stuffed animal, that will arrive with his present which I’ve been putting off because haven’t had any true alone time. I can’t talk about it until it arrives and he opens his box. It will have a lot of candy I’ve been stockpiling for him, Larry wearing his bow tie and the present.

Oh, I need to make a bow tie for my son for Monday, because Spring Picture Day.

I have no idea how many attempts using the arcade stitch and it kept becoming circular. Originally wanted to use the hexagon stitch but it didn’t feel right, so changed to the arcade.

Must have frogged the yarn five times, and would spend a day and some more of the next day before becoming frustrated at the result and frogging it again. Then repeat that the next day.

This is what it looks like currently. This after finally going up a few hook sizes. It has been decided that it’s going to be a top down pullover and will close the open sides, after making it the length to my liking, using another stitch. 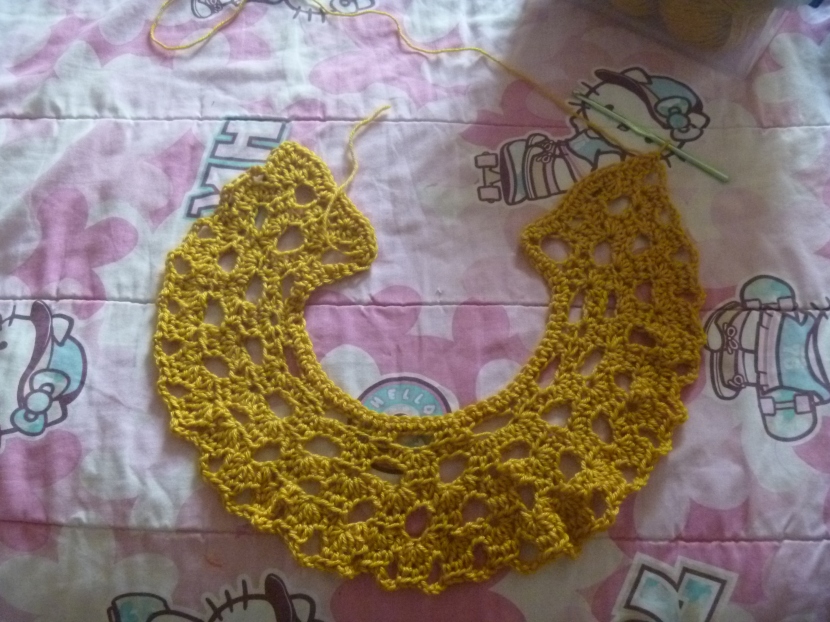 Have been putting it off but wanted to make a floral crown to wear on my birthday. (Which, is, um, tomorrow, or today, depending where you are, on the 5th.)  Talking it over with someone, we mutually decided for it be crochet, to represent my love for crafts, although I was tempted to cheat and add fake Baby Breaths. Currently making the flowers and will add a few leaves, and not sure how to stiffen it as they get added to the wire.

Forgot to add this last week but closed up the top of the third house pillow. It’s not embellished or decorated which makes it faceless as of now. Also, need to stop using white leftover muslin for pillow forms because it shows through way too much.

Usually things are flukes but buying interfacing at a certain Walmart nearby, resulted in frustration twice. First time waiting for someone, and having no time, I left after three or so minutes when no one would come to my aid. The next day, I made another attempt to get interfacing and a bit of this pretty fabric and after looking around for someone, located someone in the medicine aisle and she said she would call someone to help me out. NO ONE DID. I wasted half an hour and found myself miss other things needed to get because I was beyond annoyance. Made a small complaint to the cashier, but after he offered for me to speak to the manager, I declined because just wanted to go home.

By the way, when you’re an introvert, having to deal with greeters is the worst. Like, please, Walmart, get rid of the greeters. Getting yelled at by a disabled guy isn’t fun. When you’re exiting and focused on what other errands need to be done and you’re looking through your phone and talking to someone, so the greeter thinks you’re ignoring him. If you don’t acknowledge him, he gets mad. I rarely enter or exit that main entrance anymore. And hate it when you exit by the garden area exit and they have greeters there. I just want to come and go as I please. Can’t be the only one who doesn’t like to feel obligated to talk to anyone.