I started this a couple days ago and just randomly experimenting. The orange bit is crocheted then woven in, couple rows where I chained the yarn then wove that in, then the rest are just woven in. It looks odd but like the texture. I’m going to add a bit more orange then end on more blue. This looks good the way it is but unsure if it will be turned upside down. Depends after I attach fringe at bits.

(In case, you are wondering if I ever will get around to that blocked canvas on the left. I have not finished crushing up the crystals, so whenever I get around to doing that, then I can finally make paint and work on my painting.)

The hat isn’t finished but this is nearly it done. I want to add a bit of netting, which should have been applied underneath the bits of flowers.

In case you want to know what I was aiming for, if you look at the corner underneath, is the original pattern envelope, with a picture of what is it supposed to look like.  Instead of leaving the middle space free, I covered as much of it as possible because I like it that way. I’m that bad at following directions especially when it’s just words and limited illustrations. I am not a milliner but have been watching a bunch of YouTube examples. It’s amazing, how once you know what you’re doing, it looks easy, but otherwise it’s just material and questioning at every step what you’re doing with all the material.

I had leftover ribbon from making some of the flowers and decided to make a floral bouquet with it. I plan on gifting it to someone I talk to on Twitter. I’m a bit excited it will belong to someone who lives in New Zealand, as I’ve never sent anything to anyone that lives there.

This is just step one, where they’ve taken on the shape of flowers. Basically, you take a bit of thread and thread across the bottom of a bit of ribbon, scrunch it up, sew the free ends of the ribbon together, then gather the bottom with the rest of the thread and tie off the thread. All the sewing is done on one side and you flip it over and have your “petals”.  I need to buy green floral tape before attaching the wire. Am going to attach some green crochet leaves, then that should be done and ready to send to her. 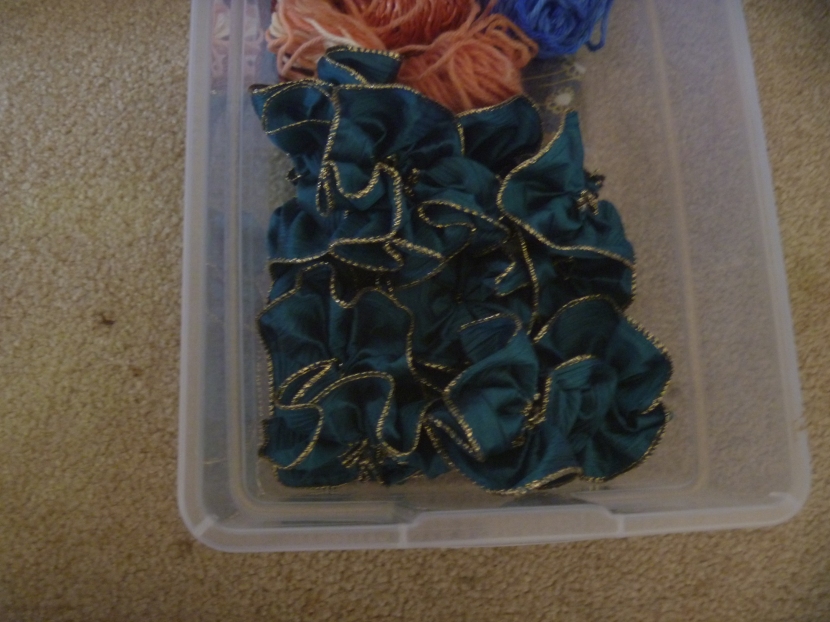 The not so secret block blanket is coming along, but has taken the odd shape. Need to add semi-triangular shapes to the sides, attach a few things and will be done.

This is the back.

It’s not obvious with this but I layered netting over the velvet. I tried to colour one piece with paint and got more paint on my hands than on the netting. After putting that down, I put two more pieces over that and didn’t bother gluing it down, as the next layer will keep it attached. Do I know what my next layer is? No.