Top and bottom pieces of a scarf.

I have no idea what to do with the middle two pieces, although it could be a different colour or just stick with off-white. Am strongly tempted to use a pale grey but not sure how it will tie in if I take that route.

Didn’t realise this would be a bit blurry. Sorry.

This started off as knitting but impatience took over, so cast off and started crocheting.

Wasn’t counting rows so the knitting was knit, purl, purl on repeat until the last stitch which was knit.

After casting off, two rows of hdc/half treble and now it’s rows of closed scallops.

This is a slow project and pretty much reminding me why I don’t actually embroider. The second thread I used kept knotting and splitting. Knotting is fixable but splitting, when you don’t want it to, makes things tedious.

Maybe I’ll learn to like embroidery but for now, not really.

Past couple of days I’ve been sewing this. I used a pattern piece for the body but the lace upper part and sleeves are just randomness. I haven’t sewn buttons onto the front yoke yet.

The sleeves oddly enough took forever. Had to sew one sleeve more than once. First time the sleeve cap was too big so adjusted it, then had sewn the sleeve backwards then had to reattach it after making a noticeable pucker.

Right now, I’m quite undecided with how to fix the bottom. It’s bothersome for tops to end close to my belly button, either above or below, which is the case for this top, but otherwise fits perfectly. I ran out of both fabrics so am currently deciding between the lace options. I’ll probably scrap both and use a third to add onto the mishmash.

Just had to share this because whoever wrote down the colour had mislabeled it. Fig is a dark purple and I looked it up and I’m pretty sure this is raspberry. I couldn’t find any other bits of this colour at that Joanns, though.

I’ve had a slow week since the kiddo went back to school last Wednesday. Now I have a bit more time to get more done.

Just a heads up, just in case, but there might not be a post next week as something that occurred yesterday has occupied my time. The middle shelving in my closet has collapsed and I’ve been emptying its contents. I want to go through all my books and make sure I still want all of them. Most of them I still constantly use but wish there was one place to store my books. Some girls have to store a lot of shoes. My weakness is yarn and reading material.

I wanted to use this week to finally start putting items up for sale on the bigcartel shop but it will have to wait until this whole mess is fixed. I do have an etsy shop but it has the actual business name but that has to be put on hold as I don’t have the funds to apply for that license and the advertising. The bigcartel is under my name. It will be under my About Me page once it goes live.

There was an actual list of things to accomplish this week but all of them have to be postponed because it’s hard for me to concentrate while things are in disarray. I’m not exactly the neatest person. The stereotype of INFPs having knick knacks and stuff everywhere definitely applies to me. It may look messy to an outsider but I have a certain system to placing things so when one thing is moved it throws me off.

Monday, I had spent my hours looking for two items: the seam ripper and a ziplocked bag of an ever-growing amount of confetti. Neither one was located.

Last week, I gave my cousin her fingerless gloves before picking up munchkin. I told her to lift up her arms so you can see them, but you can’t see the part where she slips her thumb through. I did worry they wouldn’t fit her but I tried them on and they were huge on me.

I’m an extremely avid Social Media user and one of my Twitter friends is obsessed with the number 23 and just thought it would be nice to send some crocheted numbers. (Okay, and to get more practice.)

It’s on its way to him in Darwin, in northern Australia.

The week after next week, I want to start posting a tutorial of the numbers before one of the alphabet. Stay tuned for that. 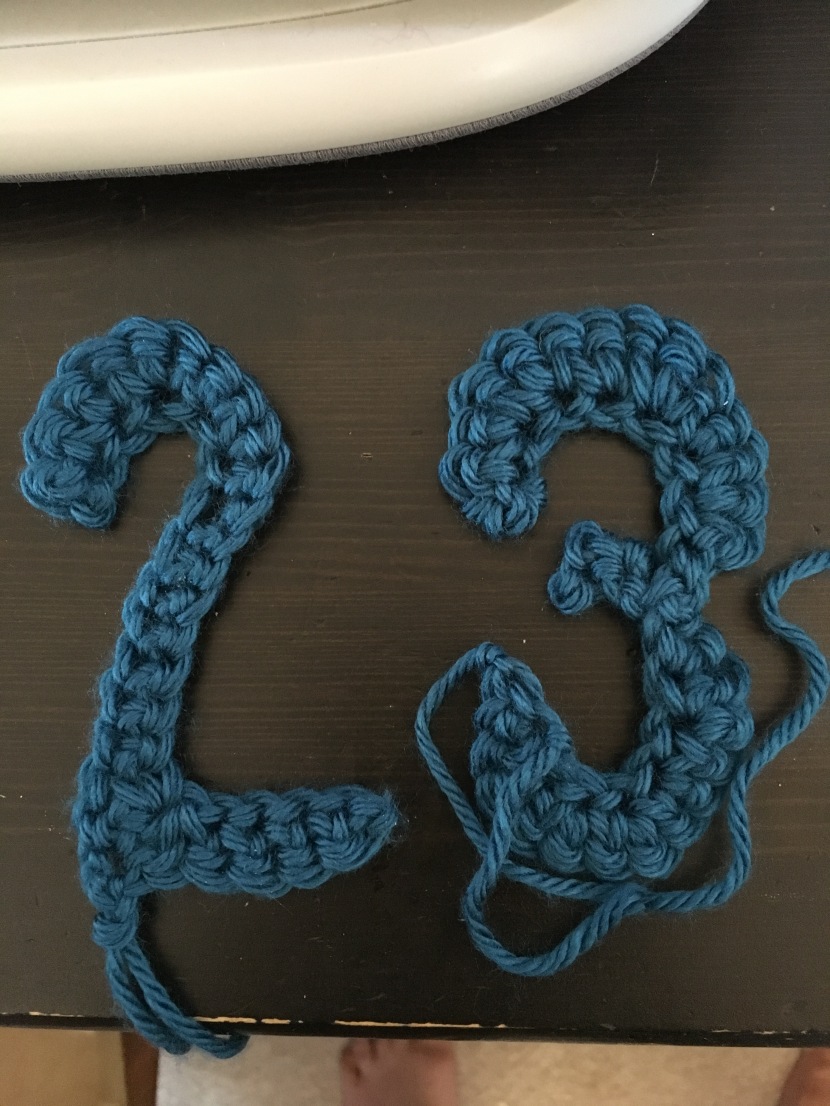 This took up the majority of last week.

Frogging these two projects to reuse the yarn.

The sleeves of the knit cardigan are both cast on.

I actually cast on the second sleeve before bed. I was lying on my tummy, on the floor, and used the light of my phone to cast on 45 stitches. After looking for my sleeve notes, not finding any then counting the first row of the first sleeve.