I didn’t know until it was last week that it was also #NaKniSweMo in addition to #NaNoWriMo, so I’ve failed on two fronts.  I obviously can’t stop waxing my upper lip and grow a stache, because I can’t pull it off and make it look sexy.

Made a fourth piece on the knitting board and it looks exactly like first red one made.

I did experiment with my dpns but didn’t like the way it looked. I need chunkier yarn for them.

So, I tried circular needles with metal tips, which is the same exact process. Still not a huge fan of metal knitting needles as they’re not as slippery as wood. 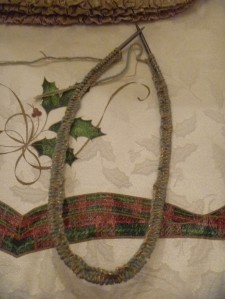 I messed up so switched to wood circular needles and, so far, it seems to look okay. There wasn’t any real reason other than the metal ones were 16″ and the wood ones are 36″.

Not sure how many stitches I cast on, but counted about 157 on a random row.

Also, not sure if it’s enough yarn to make this experiment scarf. (Everything is an experiment because I won’t use patterns until I’m comfortable enough with knitting needles.) I also want to add at least one row of faux fur but can’t find a color to at least semi-match the yarn, Lion Brand’s Wool-Ease in Seaspray.

A few rows, it’s knitted with Aunt Lydia’s Metallic 10 Crochet Thread in gold. Silver would have looked better but I’m not complaining. Basically, cast on row and didn’t count the first rows, then four without the thread, then two with it, then multiples of four and two.

Once I take it off the needle, it won’t be curled like this. 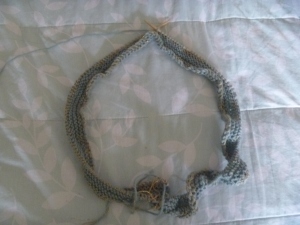 So, the (other?) striped scarf.

I took the blue scarf off the big needles as I’m getting impatient and wanted to work on a slightly bigger scale, and finish it faster.

By the way, I love the Caspian needles bought off Knitpicks, although the pointed ends are so sharp, I might stab someone.

The blue scarf looks a bit wonky. I knitted half then crocheted the other half, seamed them together then seamed the long sides. The open ends may stay open or it might become an infinity scarf.

I went on autopilot on the crochet side and the stitch used was yo 2, draw through two loops, yo again then draw through remaining 3.

So, yeah, y’all are getting scarves this Christmas.